Across the weekend of the 3 and 4 July, Porsche Centre Chester travelled to Brands Hatch to compete in the Porsche Classic Restoracing Championship and the Porsche Club Championship.  After an exciting first season last year in the Centre’s Boxster S race car, Carl Hazelton, Centre Principal and dedicated driver of the car was keen to get back to the Brands Hatch Indy circuit for what would be a very intense race weekend.

Introduction of a second ‘Chester’ Boxster

Now at the half way point throughout both championships, we were delighted to introduce a second car at Brands Hatch that would be competing alongside us in the Porsche Club Championship; another 986 Boxster S, branded in identical livery to our own race car.

As a fellow petrol head, Toby Barlow, a colleague and good friend of Andrew's took on the challenge to get behind the wheel of the 986 Boxster S race car and join Carl Hazelton in the Porsche Club Championship.  With race experience already under his belt, Toby was up for the challenge and was looking forward to getting to Brands Hatch for his first race weekend in the car.

The Porsche Club Championship began on the Saturday where the two Boxster's were able to race together for the first time.  Whilst identical in appearance, the two cars were set up differently meaning Toby’s car was running in class two and our race car was in class three.  The cars were running well and spirits were high throughout the day with Carl finishing fourth in his class and Toby finishing in fifth place in his.

However, the second race ended in disaster for one of our drivers...

Collision with our race car

Motorsport can be very unpredictable and this was demonstrated part way through the second race when another car in the competition misjudged a manoeuvre causing him to jolt into our race car.  The impact from the collision resulted in Carl spinning off the circuit. The 911 that hit our Boxster had clipped the car in such a way that it sent itself into an aggressive roll.  Fortunately neither drivers were seriously hurt although very shook up.  Both cars were recovered back into the garages and the Porsche Centre Chester race team began making emergency repairs to the back bumper of our race car.

There were moments of concern whilst the team assessed the damage to the car and evaluated whether it would affect the following day’s racing.  Fortunately the damage looked worse than it was and after an impressive stitching job and some minor mechanical amends, the car was back in one piece and ready to race again the next day.

Sunday welcomed two more races in the Porsche Club Championship for Toby, and separately Carl competed in two races in the Porsche Classic Restoracing Competition, along with 14 other Porsche Centres and Porsche Body Repairers in their 986 Boxster S race cars.  Carl finished in 10th and 9th place which we were delighted with after the uncertainty the day before.

We were elated that Toby finished third in both of his Club races on the Sunday.  As this was the first weekend Toby raced in this particular car it was a fantastic achievement.

The race at Snetterton

Saturday 27 July welcomed two merged races for both the Porsche Club Championship and the Porsche Classic Restoracing Championship. With 33 cars on the grid at the same time, it was close racing and made all the more intense with the rain showers creating low visibility and a slippy track!

Qualifying proved difficult to say the least as the moment our car went around the first bend the windscreen completely steamed up and every ounce of power on the accelerator sent the back end of the car out. There was little improvement during the first race and the addition of the car spinning out during the first lap put our car towards the back of the pack. Fortunately Carl was able to get the car back racing and finished in twelfth position.

The afternoon dried up and the car performed well during the second race, albeit difficult to pass others when starting from the back. Carl finished in ninth place.

First place for our customer entry!

Congratulations to Toby who celebrated with first place in the second race for what is now his third time on the podium since his first race at Brands Hatch.

We are incredibly excited for the next races which are being held at Oulton Park, our home circuit on the 31 August where we will also be hosting customers from the Centre.

Thank you to our sponsors APM and Sun Leisure for your support in this championship.  For more information about the two Championships or if you have any Porsche related queries please email the team  or call us on 0151 373 4899.

After months of planning, race day was finally upon us and so on 31 August, the Porsche Centre Chester team and over 130 of our valued customers met at Oulton Park for this very special event.

Each of our guests were treated to a VIP Experience at Oulton Park, which included exclusive access to our own unique hospitality area including breakfast, lunch and afternoon tea. We wanted to give our customers a special experience at our home circuit, whilst also providing a welcome base for them to return to at their leisure throughout the day.

It was soon time for Carl’s race.  Drivers and their cars gathered in the assembly area twenty minutes before each race so as not to delay the start. Each driver sat in their car waiting to be called on to the start line.  Helmets on and strapped in position, they were ready to go.

No one seemed to notice right away the cloud of darkness that began to appear over the circuit, and it wasn’t until the first drop hit the windscreen of our car that the realisation hit - rain was coming, and it was going to be bad.

After a delay to the start of the race due to the rain, the Boxsters were eventually let loose on a rather flooded circuit.

A few minutes into the race the commentator announced that one of the cars had spun off on to the grass verge resulting in a collision with a barrier.  It was Carl in our Boxster – disaster!  Fortunately Carl was unscathed and the car just needed a new wheel, however that was us out of race one.

Toby, in his identical ‘Martini’ car was out soon after, competing in the Porsche Club Championship where he finished in first place.  With the rain finished and sunshine poking through the clouds we could finally breathe a sigh of relief that the bad weather would be behind us for race two.

The last races of the day

It was soon time for the second races of the day and after an intense race, we were delighted to see Carl cross the finish line in seventh position.  Toby fought against power steering issues throughout the duration of his second race yet still managed to cross the line in second place of the Porsche Club Championship race meaning yet another podium position under his belt.

The final of the Porsche Club Championship will be held on the 28 September at Donington Park and in this round Carl will be joining Toby on the grid. 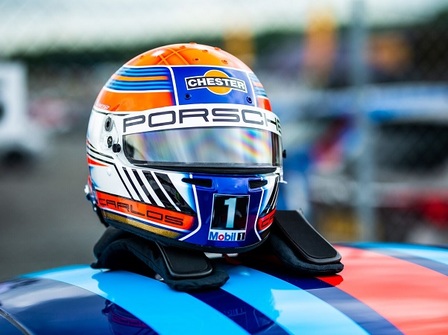 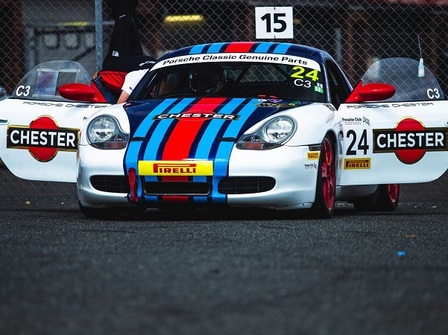 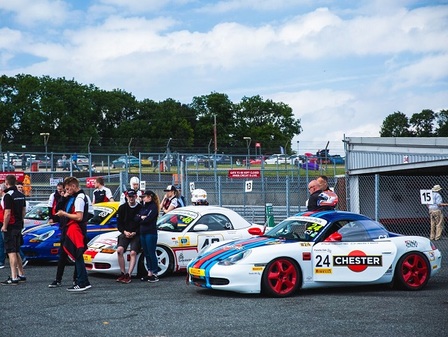 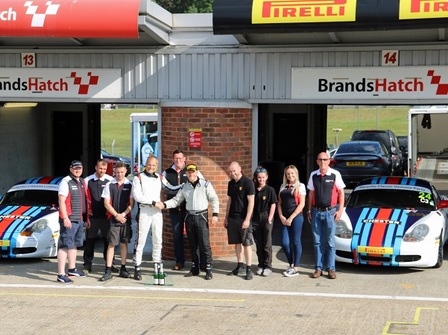 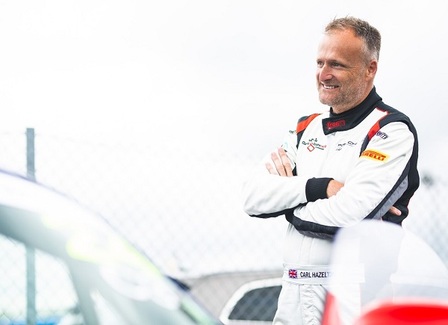 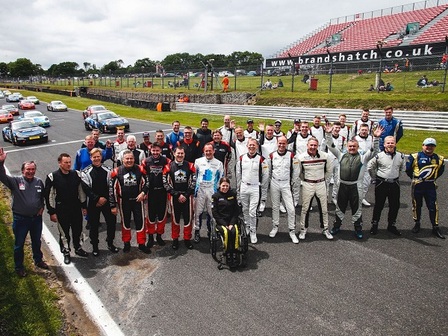 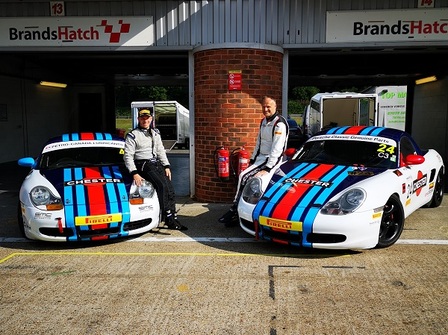 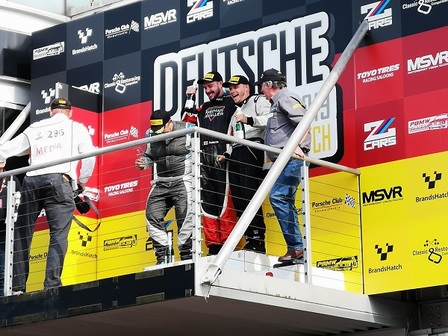 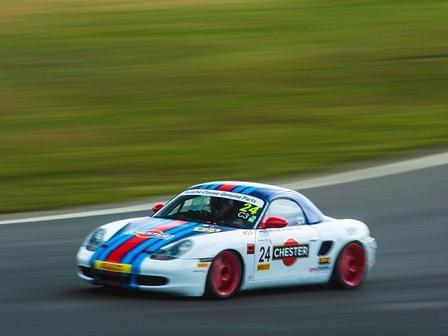 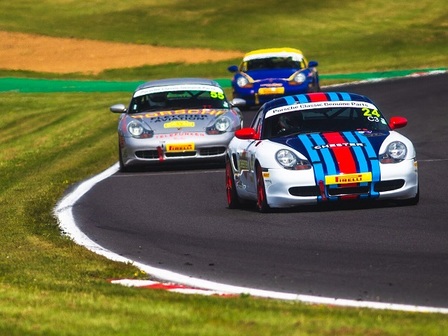 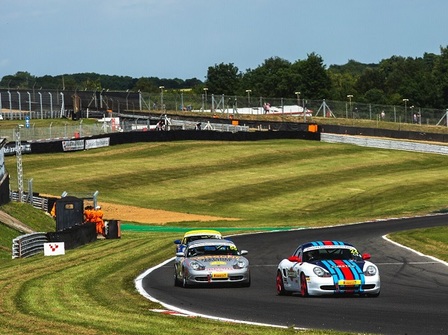 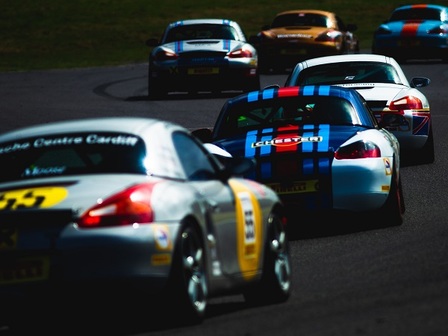 © 2022 All rights reserved to Porsche Centre Chester and its licensors.
Porsche.co.uk

*Data determined in accordance with the Worldwide Harmonized Light Vehicles Test Procedure (WLTP) as required by law. You can find more information on WLTP at  www.porsche.com/wltp . For Plug-in Hybrid Electric Vehicle (PHEV) range and Equivalent All Electric Range (EAER) figures are determined with the battery fully charged, using a combination of both battery power and fuel.

Values are provided for comparison only. To the extent that fuel and energy consumption or CO₂ values are given as ranges, these do not relate to a single, individual car and do not constitute part of the offer. Optional features and accessories can change relevant vehicle parameters such as weight, rolling resistance and aerodynamics which may result in a change in fuel or energy consumption and CO₂ values. Vehicle loading, topography, weather and traffic conditions, as well as individual driving styles, can all affect the actual fuel consumption, energy consumption, electrical range, and CO₂ emissions of a car.